In the winter 2017 edition of Muir Matters (see our blog post), Eric Grant reported on the exciting archaeological discoveries made during excavations in the Tarradale area in the summer of 2017. The main focus of excavation at Tarradale 2017 was on a narrow strip of land – an old raised beach – about 9 m above the present coastline of the Beauly Firth and backed by a steep slope leading up to next raised beach. This narrow strip of land had escaped ploughing in the past because it is too awkward to access by modern agricultural machinery and as a result some highly significant archaeological remains have survived to the present day. 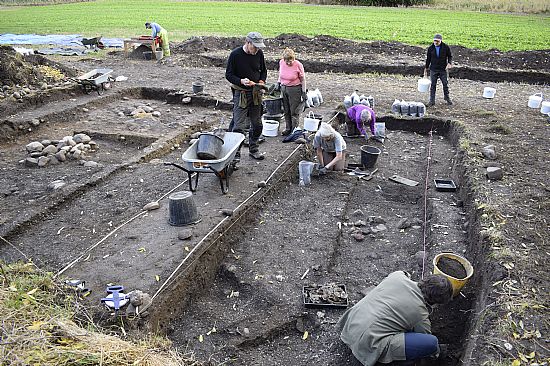 Last year’s excavations uncovered a relatively extensive shell midden (i.e. the discarded remains of shellfish that have been eaten) left there by hunters and gatherers in the Mesolithic period thousands of years ago. In addition to eating shellfish these pioneer settlers also caught and ate red deer and wildfowl and collected fruit, nuts and berries.  Some of last year’s most significant discoveries were tools made of antler that appear to have been discarded when the settlement was finally abandoned. It is possible that the site was abandoned because the sea level was rising and lapping at their feet. The most important antler tools we discovered were two large axes made of red deer antler and each had a hole drilled through them in order to take a wooden shaft. Antler is very hard but also resilient and makes a surprisingly effective axe. We are not sure what the axes were used for but they were certainly capable of chopping up large pieces of meat (from whales, seals and deer) or skinning bark of trees and digging up roots. These antler axes – called T-axes because of their distinctive shape – are very rare finds and only three or four have been discovered in Scotland before. Discovery of two T-axes at Tarradale was a highly significant addition to that total. Another important find last year was part of a spear or harpoon made of antler that may originally have had a line attached to it to throw at wildfowl or seals sitting on the mud flats of the Beauly estuary (seals still sun themselves there today). Photographs of these finds were shown in the winter 2017 edition of Muir Matters, just after they came out of the ground and with earth still adhering to them. These finds are so important that over the winter Historic Environment Scotland were responsible for having these antler finds consolidated and conserved. The attached photographs show the splendid job that has been done on the axes, the antler harpoon and the other antler finds. 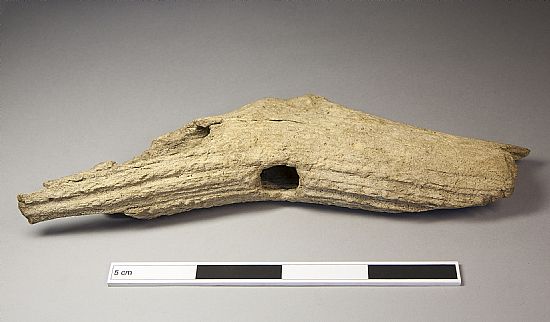 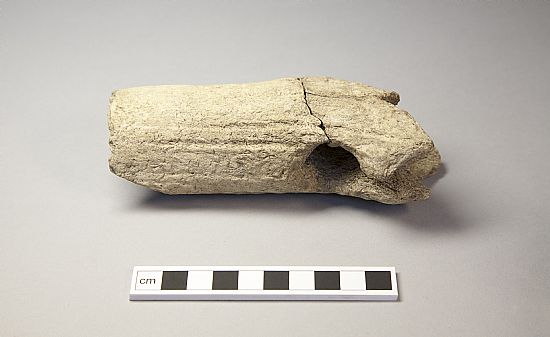 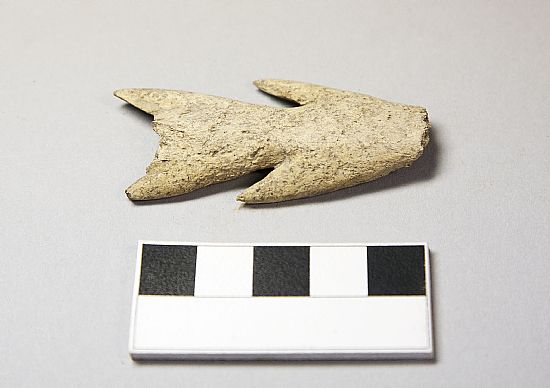 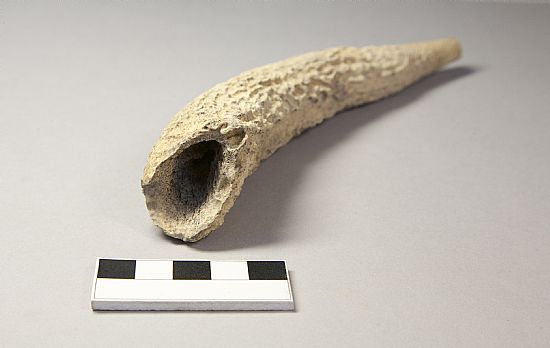 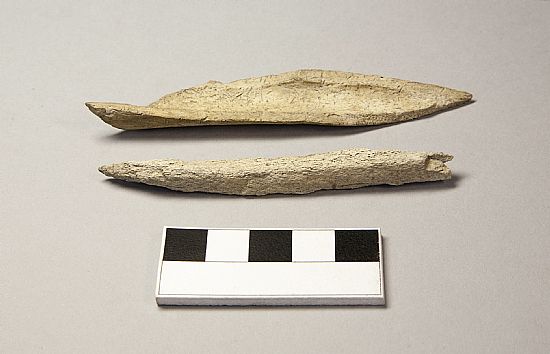 Archaeology is a complex science and although we hear a lot about excavations and can see the evidence if we are able to visit an excavation site, we hear less about the scientific investigations and analyses that take place after excavation, a process that archaeologists refer to as post-ex. From evidence gained elsewhere, we had a good idea that the site we excavated at Tarradale was about 6000 years old but scientific dating has now provided a range of dates for the earliest occupation of this resource rich landscape on the north side of the Beauly Firth. Radiocarbon dating can be carried out on organic material such as wood charcoal or surviving pieces of bone and antler and we were able to retrieve a number of samples from the excavations that provided a range of interesting dates. We have not been able to date the antler artefacts themselves as dating requires the destructive testing of a small part of the sample but pieces of charcoal and broken bone from secure contexts in the site were used. Three different sites were investigated in 2017 all lying on raised beaches facing the Beauly Firth. Site 2B was the main excavation where the antler T-axes and harpoon were found and site 1C was 60m further east on the same terrace while site 2A was at the next promontory (i.e. the degraded cliff between two raised beaches) almost a kilometre further east. Site 2A was on two levels; two trenches were opened on the lower terrace and a number of test pits on the upper terrace at the top of the degraded slope. 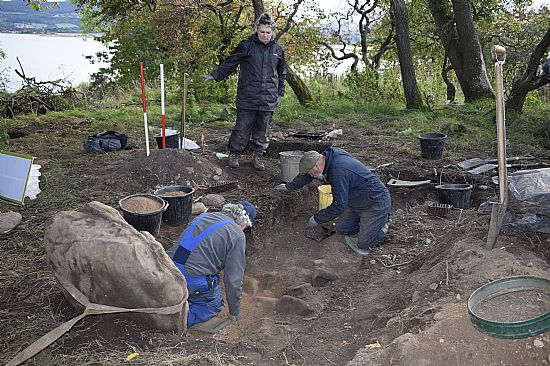 The table below is a very simplified version of the scientific results from radiocarbon dating.  Starting with site 2B, where the antler artefacts were found, we were able to use pieces of charcoal and bone for dating. Charcoal can be identified to species and a piece of elm charcoal yielded a date between 4231 and 3996 BC while a piece of charcoal from a wild apple (or related) tree gave a date of 3981 to 3805 BC. Although radiocarbon dating is a very complex science it cannot date to a specific year and dates are given as a spread with certain degrees of confidence. All the radiocarbon dates given here are calibrated to years BC (cal BC) at the 95.4% confidence level, i.e. there is less than a 5% chance that the real date is outside the bracket of the two dates given. Two pieces of cow bone were dated to 4038 to 3805 BC and 3766 to 3643 BC. These four dates all lie between 4231 and 3643 BC, right at the end of the Mesolithic period and into the following Neolithic period which saw the arrival of the first farmers. We do not know what species of cow were being eaten and it could be wild cow (aurochs) or possibly the earliest domesticated animals which would suggest that the site is at the interface between the end of the Mesolithic and beginning of the Neolithic period, a very interesting situation if that is really the case. An earlier date for a piece of animal long bone also from site 2B is less easy to explain; a possibility is that it was redeposited bone from the higher raised beach that had been washed down onto the lower level.

Site 2A consisted of two trenches at a lower level and a number of test pits on an upper raised beach tennis. Two of the dates are broadly similar to site 2B (within the bracket 4352 - 3961 Cal BC), suggesting occupation at much the same time as 2B, but a piece of alder charcoal was rather later (3012 to 2895 BC) and this came from a quite separate layer of midden suggesting at least two distinct periods of occupation. However, a date for a piece of animal bone (6071 to 5925 BC) is much earlier and significantly was found on the upper terrace or raised beach. We were extremely excited to find this earlier date of 6000 BC as that tied in very well with dates (approximately 6500 to 6200 BC) that were obtained  five years ago from test pit excavations in a field almost a kilometre further west, but significantly again from a midden lying on the upper terrace. Taken together, the dating evidence for these excavated sites  a spread of about 3000 years suggesting that these terraces were always attractive to settlers with the earliest occupation before 6000 BC, followed by a number of phases of occupation, or at least resource exploitation, to around 3000 BC, bridging the transition between the Mesolithic and Neolithic periods. The rich resources of the Beauly Firth estuary were attractive to these early hunter gatherers but when agriculture arrived the light easily cultivated soils of the raised beaches and terraces were equally attractive to the first farmers. 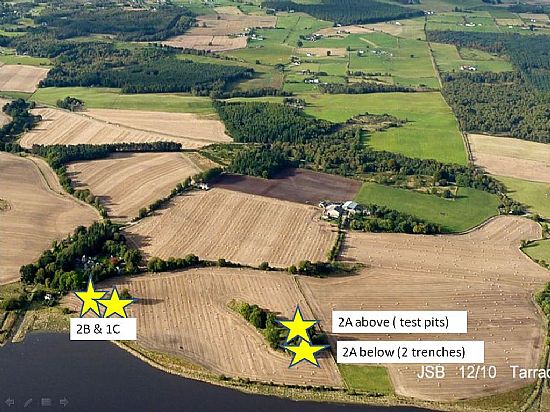 These results are still being interpreted and with further analysis we expect more information to be gleaned. We are becoming increasingly aware that the main excavation site where the antler artefacts were found is a significant one within Scotland and even in a British and European archaeological context and we hope to be able to revisit the site at a future date. However excavations, and particularly scientific analysis, are very expensive and we need to raise more money in order to be able to evaluate what are so far the earliest dated archaeological sites in the Black Isle.

The Tarradale Through Time project is one that never stops. When we are not excavating, scientific analysis is being pursued in specialist laboratories and the next excavation project is being planned. The Tarradale Through Time is a community archaeology project and through our outreach programme visits have been made to a number of local schools where talks and demonstrations were given, hopefully enthusing a new generation of young archaeologists. In the summer 2018 edition of Muir Matters (see blog post) we presented the findings of our survey of an abandoned settlement near Tarradale Mains Farm and just after Easter, some pupils and their teachers were able to visit this much later, but still very interesting, site with the children encouraged to try and visualise a settlement of traditional thatched cottages occupied by the poorest section of the community who still relied on the exploitation of local resources.

In late summer 2018 we started excavations at our next two sites which so far are only known from crop marks seen on aerial photographs. The only evidence we have is rather enigmatic indication of possible ditches and pits at these sites. We do not know exactly what these sites are - one may be a late prehistoric or possibly medieval homestead surrounded by an outer ditch, to the south of Gilchrist church, while the other appears to be small promontory fort projecting into a former kettle hole loch near the Black Isle Showground. Excavations took place for these two sites between 8 and 22 September 2018. The excavations were open to members of the community to participate in or to visit; instruction was given to those who had not excavated before and wanted to come and learn about this fascinating process. If you are interested in volunteering for future excavations please communicate with us at tarradalethroughtime@gmail.com.

The above article was first published in Muir Matters.