Looking ahead to the Barrow Cemetery Excavation 2019

Although this field looks little different to any of the other rich arable fields lying to the east of Muir of Ord, there is evidence to suggest that under the soil are the remains of a large number of prehistoric and possibly Pictish graves. There is little to see on the surface to indicate that this may be one of the most extensive prehistoric cemeteries in Scotland but aerial photographs clearly show that a large number of barrows (i.e. the mounds raised over graves) were constructed there in the past. 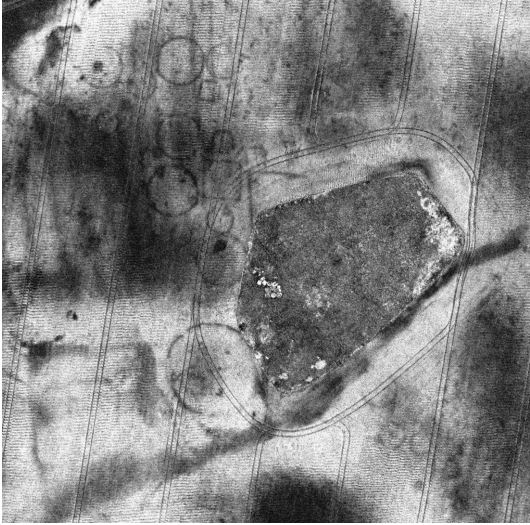 These barrows are now ploughed out and all that can be seen on the aerial photographs are the outlines of the ditches that surrounded these barrows and was the source of the material that was thrown up to create the barrow mounds. These ghostly outlines are seen on aerial photographs as crop marks which come about due to the difference in soil conditions between the buried ditch and adjacent subsoil resulting in differential growth of the crops above. In a dry season the crop on the surface will be slightly more luxuriant if it is growing in the deeper topsoil above a buried ditch or where a grave has been cut into the subsoil. On the accompanying aerial photograph of the Tarradale barrow cemetery the circular or square outlines of the barrow ditches can be seen, and in the centre of some these barrows the outline of the graves can also be discerned. Archaeologists spend a lot of time looking at aerial photographs and trying to interpret these crop marks and have come to the conclusion that the Tarradale barrow cemetery is potentially one of the largest prehistoric and Pictish cemeteries in the Highlands. The barrows that we see in outline on the accompanying aerial photograph vary in size, from a few metres to 30 metres in diameter, suggesting different burial practices at different times in the past, possibly starting in the Bronze Age about 4000 years ago and continuing until the end of the Pictish period around 1200 years ago. The sizes and shapes of barrows may also indicate social status and it is likely that only the most important members of the community were buried under prominent mounds while the ordinary folk were interred in simple graves or cremation pits in the surrounding area.

Juliette Mitchell of the University of Aberdeen has prepared a map that tries to clarify the features seen on the aerial photographs. Her interpretation suggests a mix of barrows and other enclosures suggesting a complex multi-period cemetery. The barrow cemetery was probably once much larger but has suffered from plough damage, and particularly so in recent years as the field is intensively cultivated. 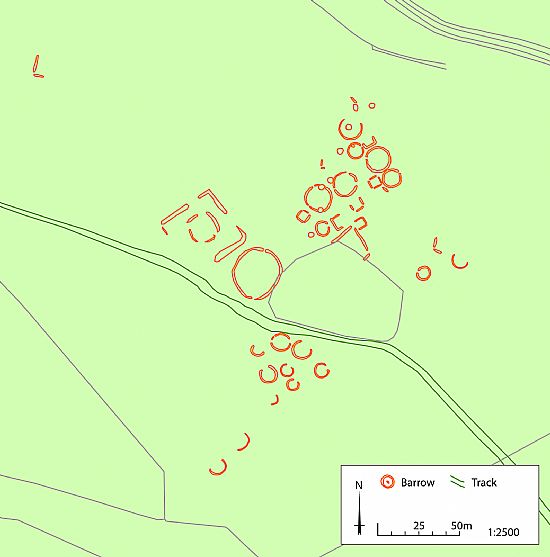 Interspersed between the round barrows there are clear evidence of square barrows, or rather the ditches enclosing square barrows, displaying a variety of sizes from 6 m across. Square barrows are generally considered to date from the Pictish period (i.e. from circa A.D. 400 to A.D. 800) and this has been borne out by excavation of square barrows in other barrow cemeteries in the Highlands. If you are interested in learning more about Pictish barrow cemeteries there is an excellent account of the excavation of a Pictish cemetery at Garbeg (near Drumnadrochit) and also at Whitebridge (near Dores) on the North of Scotland Archaeological Society (NOSAS) website. This can be accessed through the following link

However, there is another aspect to the Tarradale barrow cemetery that needs investigation. The accompanying aerial photograph shows that in the middle of the spread of ploughed out barrows, part of the field is unploughed and it still stands a few feet higher than the adjacent ploughed area. We do not know why this island of land was left unploughed, but it is possible that there was one very large barrow there that survived in the landscape and discouraged earlier farmers from attempting to flatten it. This may be because the barrow was too big or perhaps too stony to remove, but it could also be because the mound there represented a cultural barrier, as barrows, particularly large ones, often have some traditional folklore associated with them which encourages their survival. In many areas of the country we find fanciful names given to prehistoric mounds, names like “the giant’s grave” or “the prince’s cairn” that had sufficient reverence and mystery attached to them to prevent their being destroyed. If you look carefully at the excerpt from the 1788 estate map of Tarradale you can see two mound-like features, the lower one labelled “brush” and the upper mound labelled “brushwood”. All around can be seen the curved lines of rig and furrow cultivation and is clear that these two mounds stood above the cultivated area and were covered in brushwood. Today the upper of these two mounds with the square enclosure has been completely removed but its outline can be clearly seen as a crop mark in the bottom left corner of the aerial photograph. The lower of the two mounds coincides with the area that is still unploughed today. The mound is now rather flatter than the 1788 map shows, suggesting that there has been some attempt to remove it, but for some reason the uncultivated area in the middle of the field has persisted right until the present. 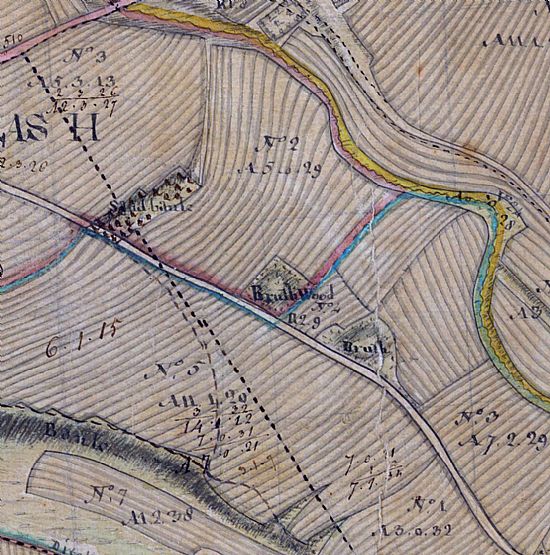 Above: Excerpt from 1788 estate map of Tarradale

The TARRADALE THROUGH TIME community archaeological project has designed a detailed plan for the 2019 excavation of part of the Tarradale barrow cemetery to try and get some idea of the degree of survival of the features below the surface and whether information can be obtained about the age and sequencing of these grave mounds. Previous field walking has revealed very little on the surface to indicate that the area was used for burials as more than 1000 years of ploughing has destroyed any surface features. However, the aerial photographs strongly suggest that evidence of these burial structures survives below the topsoil.

What information do we expect to find? First, we should make it clear that although this is a prehistoric cemetery and all graveyards should be treated with respect, we do not expect to find the physical remains of bodies. The soil is very sandy, being part of a former raised beach, and sandy soil tends to be somewhat acidic and free draining with the result that organic remains such as bones or wooden coffins quickly rot and are unlikely to survive to the present day. What we do hope to find are the remains of the ditches that were constructed round the barrows and possibly the grave cuts where a rectangular slot has been dug out to accommodate a burial. After a barrow ditch is dug, it slowly fills with soil which tends to be a different colour to the subsoil and when the current topsoil is removed we hope to be able to see and map this differential patterning of soils. The destruction of the site by later ploughing will have removed the top part of the ditches and graves and it will not be until we excavate that we will know how much survives below the present topsoil but we hope to find at least the lower part of the ditches and grave slots.

The TARRADALE THROUGH TIME project works closely with the North of Scotland Archaeological Society and they have hired Stephen Birch, a well known Highland archaeologist, to lead the excavations at Tarradale barrow cemetery, with academic support from the University of Aberdeen. The excavations will start on 31 August and continue until 15 September 2019. TARRADALE THROUGH TIME is a community archaeological project and members local community are encouraged to visit the excavation and, if able, to help at the excavation. Training will be given but a minimum of three days commitment to the excavation is required. Alternatively, you can come and visit at any time and there will be in open day arranged towards the end of the excavation with an exhibition and talks on site.

Comment from Johnnie Murchison at 12:43 on 19 May 2019.
Fascinating discovery which will help clear the mists of history in this area.